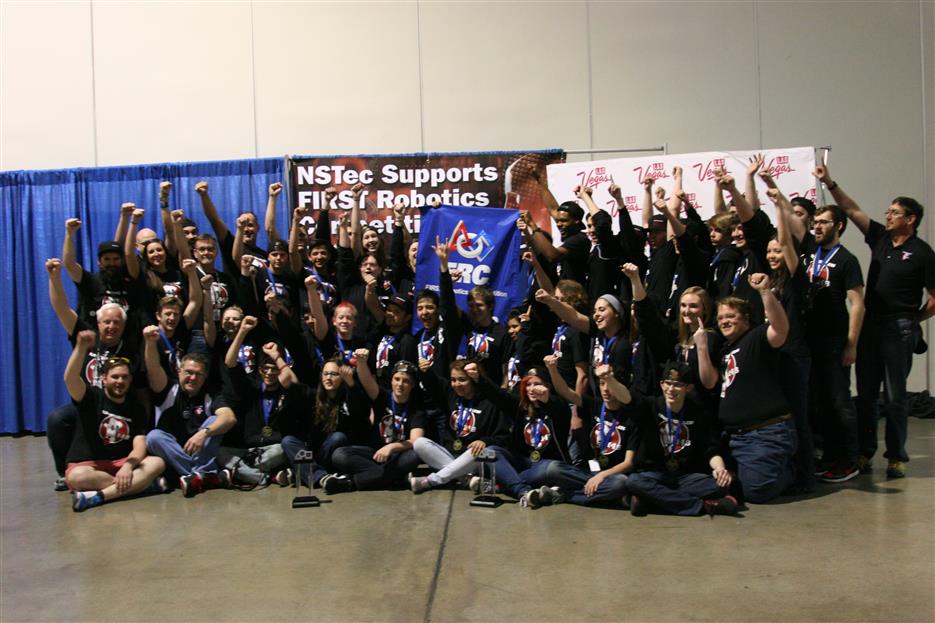 Last weekend, the Robowranglers competed at the Las Vegas Regional for the first time in team history. The team used this opportunity to troubleshoot and improve upon their performance before heading to the Robotics World Championship later this month.

The 2015 game, Recycle Rush, challenges teams to stack grey totes up to six high and cap those stacks with recycling containers to triple the team’s score. Each alliance of three teams plays on one half of the field to get the maximum amount of points possible.

Coming off of a second place finish in the Dallas Regional over a month ago, the Robowranglers were ready for a successful showing in Vegas. After finishing the qualification matches ranking first place, 11 points above the next ranked team, they chose Team 987, The High Rollers from Las Vegas, to work with them in the final rounds. For their final selection, they chose Team 5012, Gyrffingear from Palmdale, CA, to be on their alliance. Throughout the playoff rounds, the alliance worked well together, setting a new regional high score in almost every match. The Robowranglers won the Las Vegas Regional by out-scoring their opponents by 120 points. The team also won the Industrial Design Award, sponsored by General Motors, which celebrates form and function in an efficiently designed machine that effectively addresses the game challenge.

“I personally am so proud of what the team has accomplished this year. We went out and took a huge risk in robot design, and so far it seems to be paying off,” said Robowranglers Coach, Adrienne Emerson. The Robowranglers took a risk this year and built two robots that are tethered together to play in order to more effectively and efficiently complete the challenge. The robots, Batman and Robin, maximize the amount of points that can be scored in a match by separating and having each robot complete a task simultaneously.

“No matter what happens in the rest of our season, I hope that our students have seen this season that it is OK to take risks. Whether you succeed or fail, taking a risk is better than not pushing yourself to your maximum potential,” said Emerson.

The Robowranglers are preparing to go to the Robotics World Championship in St. Louis, MO on April 23rd-25th. The team and coaches place a high emphasis on iteration and continuous improvement. “Our performance in Las Vegas was great, but we have identified several ways to improve our robot and strategy in the coming weeks to be even more competitive at the Championship,” said Emerson.

For more information on the Robowranglers or the Robotics program at Greenville High School, contact Adrienne Emerson at emersona@greenvilleisd.com.