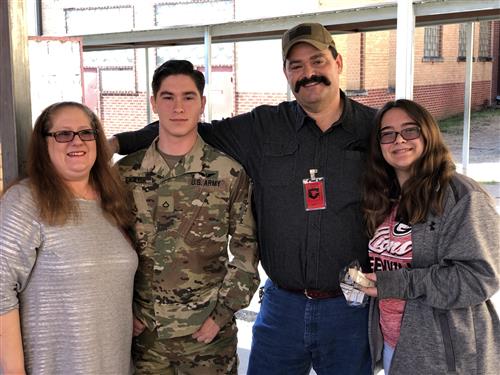 Eighth-grader Raylee English declared it to be the "best Friday ever."

That's because her brother, Seth, is home from serving in South Korea for 14 months.

Seth surprised his little sister when he stopped in at the Greenville Middle School cafeteria.

After the hugging, tears and cheers, Principal Dale Mason told Raylee she could have the afternoon off to be with her family. Parents Nicole and Justin English arranged the surprise with the staff at GMS.

"It just feels great to be back home," Seth said before going into the cafeteria. Then he added with a sly smile, "I know she's going to freak out."

Nicole and Justin asked Raylee to spend the night with a friend so they could drive down to Fort Hood in Killeen to pick up their son at midnight Thursday.

"The first thing I did was hug my parents, then we found a Whataburger, and I got a Number Five: bacon cheeseburger, fries and sweet tea," Seth said. "It felt great. Then I had breakfast at Cracker Barrel - the sunrise sampler with fried eggs and hash browns. I love that good old greasy American food."

Seth, 19, is a 2017 Greenville High School graduate. He remembers the important principles he learned during his years in the NJROTC, where he was commanding officer as a senior.

"I learned about chain of command and the importance of respect," he said. "Now I'm an aviation mechanic and I'm getting some great on-the-job training."

Seth said he is looking forward to seeing friends from high school before returning to Fort Hood in late February.