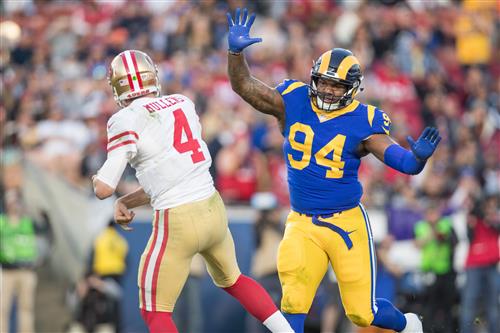 In what he called "every football player's dream come true," 2014 GHS graduate John Franklin-Myers is headed to the Super Bowl.

And Greenville ISD students and staff are showing their support by dressing in Los Angeles Rams' colors -- blue and gold -- on Friday. Everyone can wear jeans with their Rams gear and colors.

“I am so excited to see John not only getting the opportunity to play in the NFL, but to also play in a Super Bowl. It will be fun watching the first GHS graduate to play in the Super Bowl," said Greenville High School Principal Heath Jarvis. "This will be a special time for him and his fans from Greenville."

Franklin-Myers, who plays defensive end for the Rams, says sometimes he can't believe he's playing in the biggest bowl game on Earth.

"This is just something I’ve been waiting for my whole life. The chance to do it, especially as a rookie, makes it all the more special," he said.

Franklin-Myers was voted Rookie of the Year by his teammates, something he humbly said "just means a lot to me."

"I remember as a little kid looking forward to the varsity football games and saying, 'That’s going to be me soon.' As a little kid, you really look up to those guys on the varsity team. Now as a player, it’s reversed. I've got little kids looking up to me. Having the chance to interact with them is something I really enjoy, and I try to give back as much as possible," Franklin-Myers said.

Franklin-Myers said he wouldn't be where he is today without the support and training he received from GHS Head Football Coach and Athletic Director Darren Duke.

"I’ve got some love for Coach Duke. He’s one of the best coaches I’ve had," Franklin said. "He showed me everything and helped me make my way to college (at Stephen F. Austin State University,). Coach Duke taught me how to work hard and he took care of me outside of football – he and some of the other coaches really helped take care of me as a person."

The feeling is mutual.

"I'm so proud of John. His is a great story of perserverance," Duke said. "If you follow his career, this is what working hard looks like. He played hard for Greenville High School, and even though we weren't winning, he always showed up, played his hardest and did his best. And he did the same thing at Stephen F. Austin and now, he does the same thing for the Rams. And he's going to the Super Bowl because of his work ethic and his character, in addition to his athletic ability."

Franklin-Myers says he appreciates all the support from his Greenville friends and fans.

"Right now, I’m just focused on winning the Super Bowl and I'm grateful for being able to represent Greenville," he said.

Click HERE to see Franklin-Myers describe his path to the Rams.