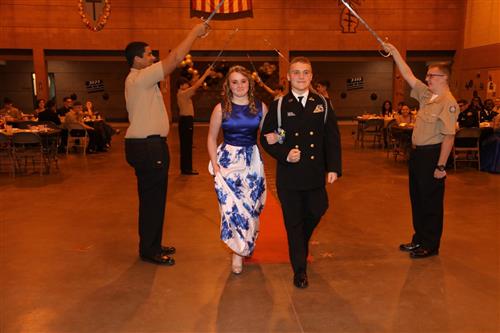 The Greenville High School Navy Junior ROTC team held their annual Navy Ball on February 8th. The Navy Ball celebrates the Navy’s proud heritage as well as that of the Marine Corps’. The Navy Ball is a fun environment that allows the NJROTC cadets of the unit the opportunity to attend a “black tie” event not ordinarily observed by college students. While typically held on the Navy Birthday, October 13th, the NJROTC unit adjusts the timing of the event as needed to accommodate the school schedule. The ball is open to all cadets, their guest, parents, and honorary guests.

Greenville NJROTC is fortunate to be supported by the local National Guard Armory, who generously donates the space to hold this formal, yet fun event. Additionally, the unit has partnered with a number of local organizations and individuals who provide unwavering support to the unit and its cadets. Present at Saturday’s ball were representatives from the Veterans of Foreign Wars, the Golden Kiwanis, and the Lions Club. It was also attended by Assistant Principal of Greenville High School, Mr. Dale Mason.

The Navy Ball is a mix of ceremony and fun. The evening began with honors to the flag, a stirring ceremony commemorating Prisoners of War/Missing in Action (POW/MIA), short introductions given by the cadets, and award presentations. Special to the Greenville ceremony is a sword bridge under which award recipients march to receive their certificates.  After a buffet dinner, the ball continued with a gift raffle and then an evening of dancing and the cadets letting their hair down.

All awards are voted for by the cadets with no input from the instructors.